A Call for Youth Voice on Zero Tolerance to FGM 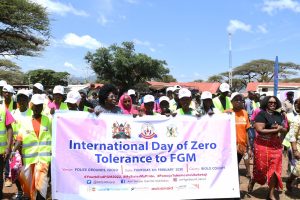 Chief Administrative Secretary, Hon. Rachel Shebesh presiding over the event in Isiolo County, challenged the youth to end FGM practice in their generation and ensure that it is not passed on to the next generation.

The CAS decried the fact that women and girls have borne the brunt of the harmful consequences of FGM for a long time and it was long overdue that the practice is eliminated once and for all.

She said involving the youth is a prerequisite in the fight against FGM given the significant population growth among the youth and their influence in society. She asked them to utilize their energy, numbers and influence in community to call for the end of the archaic practice.

“The youth have a role to play in creating awareness and educating parents and cultural leaders on the harmful effects of FGM to the girls and advocate for zero FGM. The young people are the parents of tomorrow and they can make a decision not to take their own daughters through FGM. As government and in partnership with our development partners we are at hand to accord you all the required support,” said Hon. Shebesh.

She emphasized that the government was not fighting cultural practices but was fighting harmful cultural practices that infringe on the rights and well-being of girls and women. “The presidential directive to end FGM by 2020 is unstoppaple course that we must achieve at all cost,” she affirmed.

The CAS also warned complacent Chiefs and Assistant Chiefs that they risked arrest if the practice continued in their respective jurisdictions unabated. “The chiefs and the assistant chiefs know the people in their villages and the homes where girls are cut,” said the CAS adding, “To end FGM, we need to implement the law and the law is very clear on the consequences.”

She challenged practitioners of female circumcision who are carrying out the cut as a source of livelihood to abandon the practice and seek alternative means of generating income through Government Affirmative funds for economic empowerment.

UNFPA Kenya Representative Dr Ademola Olajide expressed his commitment to ensure that UNFPA walks with the government in ensuring that the Presidential Directive is achieved. “It is not our duty to question if the 2022 target will be realized. We have to roll our sleeves and do all that we can to ensure we hit the target,” said Dr Ademola.

The day was preceded by a Youth Summit on FGM converging delegates from the 22 hot spot counties in Kenya and from within Isiolo County to share best practice on ways young people can spearhead ending the vice in their respective communities. The summit was a culmination of a youth caravan that traversed the counties of Samburu, Isiolo, Meru, Tharaka Nithi and Embu creating awareness on the consequences of FGM.

Isiolo County is one of the 22 FGM hot spots in Kenya with statistics indicating that about two-thirds (65%) of girls aged 15-19 have undergone the practice compared to the national average of 21%.